Man Pedals Across America with his Dog on a Cargo Bike

A Texas man is pedaling his bike across the United States with his dog in a grassroots campaign to support nonprofit animal shelters and urge pet seekers to avoid so-called puppy mills. 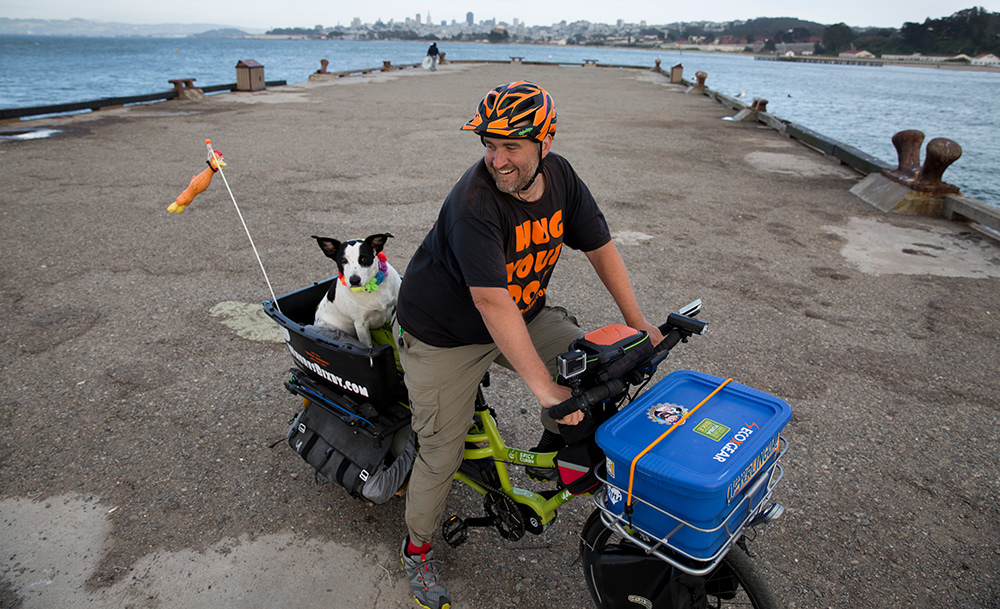 Mike Minnick, 38, and his five-year-old border collie mix Bixby have visited more than 50 animal shelters during their yearlong adventure that has brought them from easternmost Maine to California, more than 8,000 miles and counting.

“There are so many beautiful dogs desperately in need of a home and friendship,” says Minnick, who adopted Bixby from a shelter in his former hometown of Austin, Texas. “If you love animals, donate to your local shelter. Puppies should not be a for-profit commodity.”

Minnick’s journey across America on two wheels with Bixby has a secondary goal: to inspire Americans to bicycle for fun and fitness. The former smoker took up cycling as a way to lose weight and kick his cigarette habit. “I used to get in my car to drive two blocks to buy cigarettes,” he says. “Now I’m in the best shape of my life and happier than ever.” Minnick, Bixby and their cargo bike loaded with more than 100 pounds of camping gear, dog food and a dog bed mounted to the rear rack attract crowds wherever they stop. Most long-distance bicyclists choose lightweight bicycles and carry minimal gear. That wasn’t an option for Minnick, who rides a Mundo cargo bike from Yuba Bicycles. “I won’t set any speed records. We go slow and steady and enjoy the views.” Minnick’s journey began in September 2013 in Lubec, Maine. From there they pedaled the East Coast to Key West, Fla., before heading to New Orleans and Texas. From Texas they headed northward through Oklahoma, Colorado, Wyoming and Montana to Washington. From Seattle they pedaled down the coast through Portland and stopping in Petaluma to visit with Yuba, before heading southward to Los Angeles.

Minnick has no plans to stop pedaling. After some rest time in southern California this winter, Minnick and Bixby will turn back eastward on Route 66. “When I walked away from my life in Austin I had a nice home and great friends but I was in a rut. My life was flashing before my eyes. Now I wake up everyday excited. This is the most fun, challenging, rewarding and adventurous thing I’ve ever done. We live in one of the most geographically amazing and scenically beautiful countries in the world. Bixby and I get to see it, meet its people and pedal it under my power, using no gasoline and living like kings for next to nothing.”