A tale of two friends on an epic bike tour on a beautiful island.

Fact: Taiwan has been dubbed the bicycle manufacturing capital of the world.

It is also the manufacturing birthplace to many Yuba products, including the Mundo LUX and Sweet Curry Cargo Bikes. In March of 2017 I was visiting our team in Taiwan to accompany the very first Sweet Curry cargo bike off the assembly line.

Taiwan has some of the densest urban sprawls in the world, but it is also home to a lush, tropical coastline not often ventured by tourists.

From the many people I’ve met who ride bicycles in Taiwan, I’ve learned that lapping the island is almost a right of passage. The Mayor of Taipei partook in the festivity by riding from the north of the island to the south in one shot!

Hearing stories like this from the locals is what drove me to organize this trip for the Sweet Curry’s maiden voyage. I linked up with a longtime friend, Kevin, and we took the newest Yuba Cargo Bike on a real life test ride along the east side of of the island.

Getting our bikes to the train station was an intimidating task at first. The rules state that a bike need to be in a bag with the wheels taken off to board the passenger section of a train. This would prove to be a challenge since we’d have to carry cargo bikes in addition to our gear. Carrying cargo bikes also ran the risk of being rejected by the on board train operators for being too big. We found another option. Train stations in Taiwan allow you to ship large items on the freight trains that run along the same tracks as the passenger trains. We shipped our bikes to the station in Taitung City, which is located on the southeast coast. This took a couple of days to arrive since cargo train run on different schedules than passenger trains. As we departed Taipei Main Station and enjoyed the cool A/C of the train car, we were excited to preview some of the terrain we would soon be riding.

When we arrived at the train station we located the package drop-off/pickup and assembled our bikes using some multi-tools that we packed for the ride. We unfortunately were missing a few key items- a strong pump (read forearm workout) and a pedal wrench. After our bikes were put together we borrowed the floor pump from the Giant bike shop near the train station to give our arms some rest. It took us about about 30 minutes to get our hostel. We were able to use this ride to get a feel for our new rigs and make adjustments for our longer days. 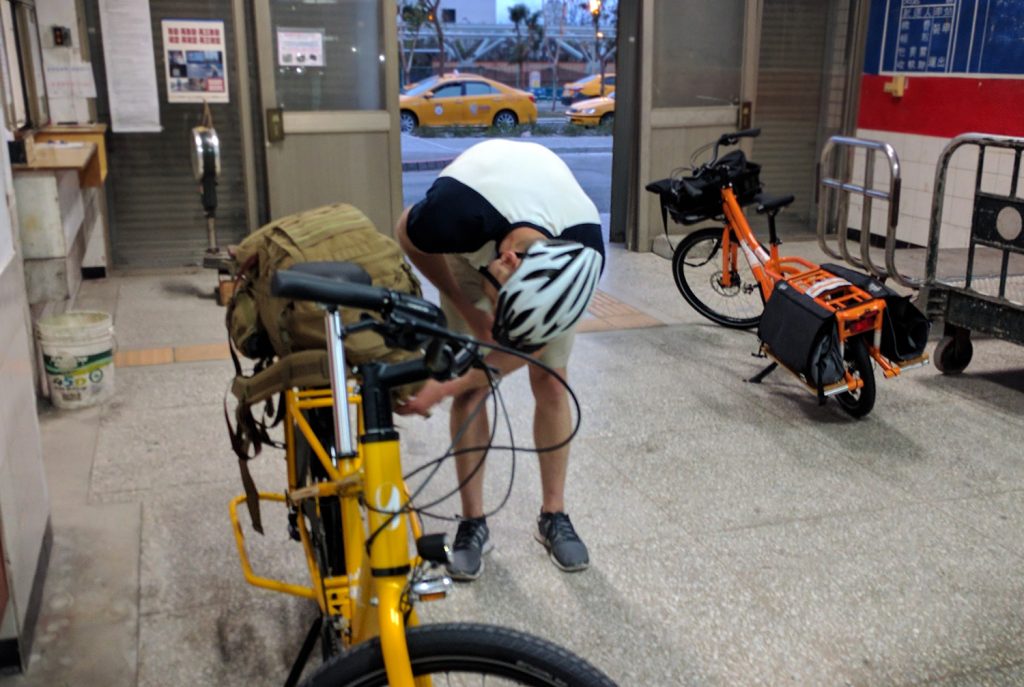 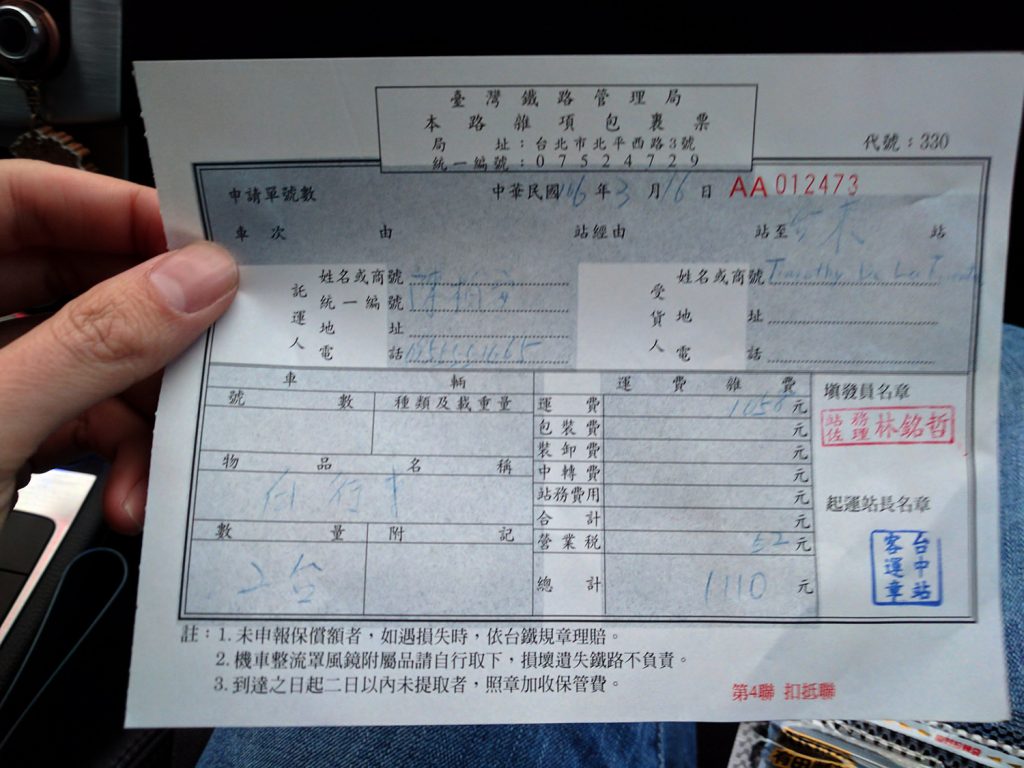 Pickup slip for our bikes

In the morning we set our bikes for the journey. I used 1 strap to secure my duffel bag to the carrier of the Sweet Curry. I packed the 2-go Bags with easy to grab goodies like tubes, rain jackets, bike tools, locks and extra water. The bread basket held my insulated water canteen, a small travel speaker and some snacks.

Having the load set down low on the on the Sweet Curry was really nice. There was almost no handling penalty while hauling the additional 55-60lbs. The bike still felt very comfortable. Keep in mind I was only riding with a fraction of what the bike is capable of handling, but it was hardly noticeable. When I try to haul this type of weight with other types of bikes, I usually feel it in the handling, especially at low speeds.

Another point I appreciated about this bike was the lower stepover height. At the time of riding, this was our longest lowest bike. (The Supermache takes that crown now). But this made mounting/dismounting extremely easy. That’s important to note when you can’t swing your leg over the rear cargo. (Great work Barley!) Another thing I noticed is that I was able to get up to rolling speed fairly easily with the 20” rear wheel. Kevin was able to keep momentum a bit longer with the 26” rear wheel of the mundo. In my opinion the penalty is worth it if you’re hauling a lot gear on the loading platform. 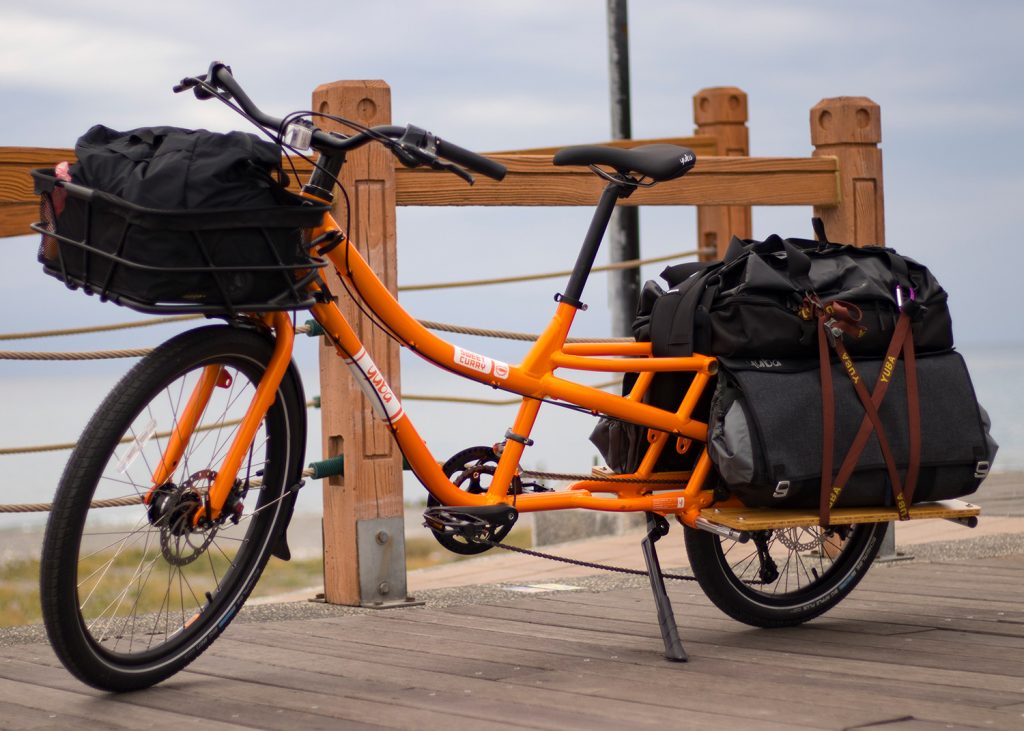 Kevin rode a Mundo V5 and was able to clip his surplus military pack directly to the top carrier using the pack’s built in buckles. He’d be using this for the next month as he traveled throughout Asia.

Kevin stretching on Day 1 of the ride

This was Kevin’s first time riding a cargo bike and there was a very small learning curve for him. Nothing more challenging than the having to learn to ride a traditional touring bike for the first time- perhaps less of a challenge than that. He was very comfortable from the get-go. He stored his backpack on top of the carrier as opposed to the side to ensure his weight was balanced. Although the weight was up high, it was 35 lbs, it was strapped securely and it was almost unnoticeable to him. 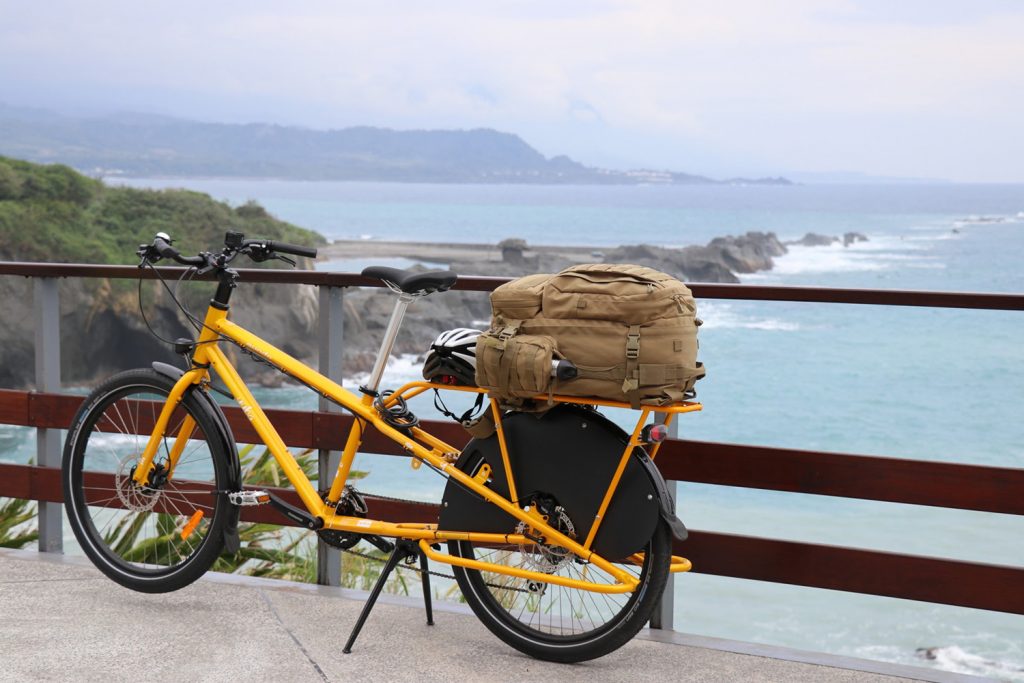 Getting on the Road

We left our hostel bright and early to take a few photos at the coast to mark our departure from Taitung. We bumped into another group of riders who were intrigued by our bicycles. They were curious about why our bikes were so large. Communication was a little tough, but we explained the many uses of a cargo bike through speaking slowly, showing photos and sitting on the rear carrier. 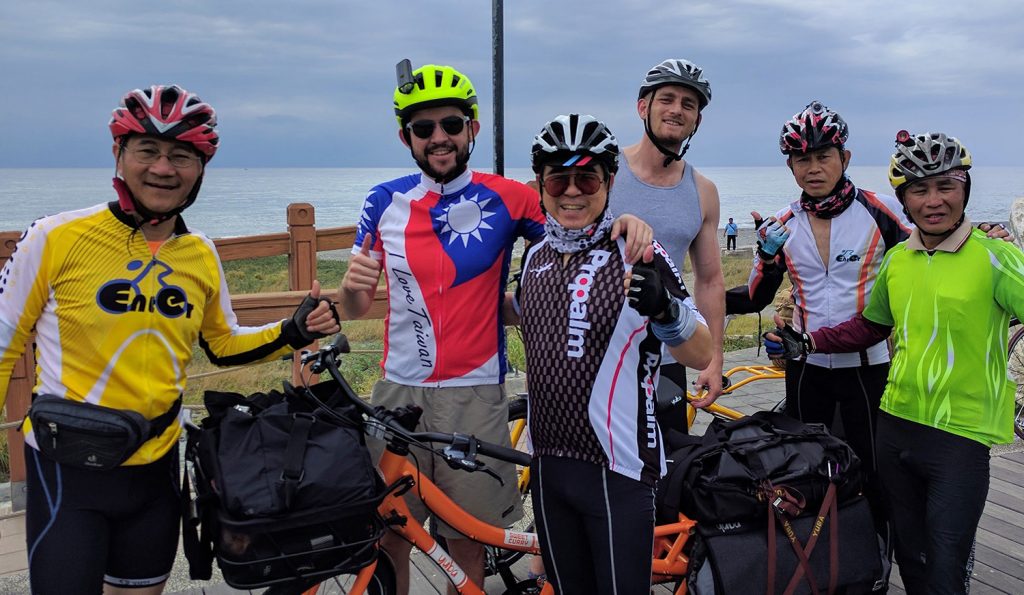 Group of cyclist we met at the start of our ride

These cyclists were Taiwan natives who were taking some time to lap the whole island. One of many trip highlights was when one of the gentlemen went to lift one of our loaded bikes then lifted his carbon road bike in comparison.

The rest of the Ride

Each day took us through new, but increasingly familiar terrain. Beautiful blue ocean with desolate rocky beaches to the right and tropical mountain terrain to the left. There was a mixture of tiny towns, unpopulated roads, and even a few busy highways on the journey. Our only areas of unease were through tunnels with gradients. Descending tunnels was fine as we took the lanes, but ascending left us closer to traffic than usual. With that said we didn’t experience any “close calls” and had the road to ourselves for a lot of the ride. 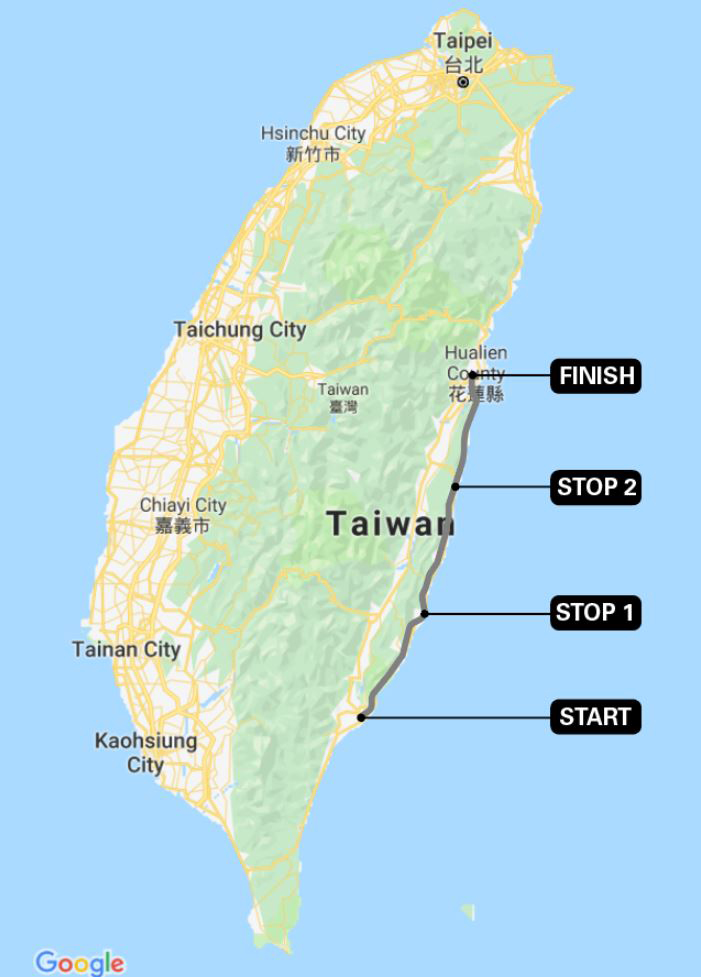 Day 3 50km, Unknown gain but this day had the most climbing.

There are a lot of mopeds in Taiwan. And I mean A LOT. We were able to find parking fairly easily, we’d just squeeze into some of the moped parking areas. We were also able to curb park our bike outside of our hotels, which didn’t seem to bother the on site managers. When we got into Hualien, which is a larger/denser city, we managed to find a hostel with a downstairs luggage area. We stored out bikes in there. Even though we were riding some of the larger bikes on the island, we were still comfortable in finding storage for them. 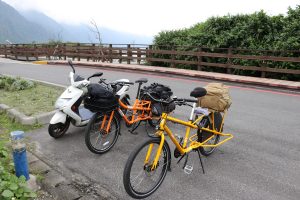 Blending in with mopeds

Parked by a BNB

Another thing to note is that theft in taiwan seems to be pretty minimal. At least in the areas that we passed through. We were not worried about our bikes, which can be a burden when traveling in some places.

There were many rest areas and lookouts along the way and we stopped at quite a few. 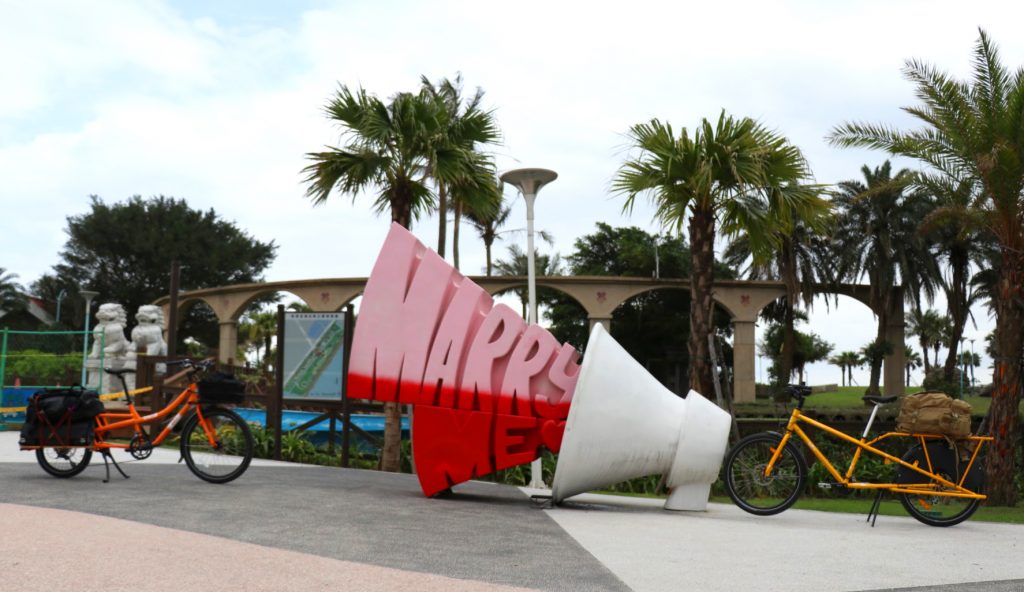 This particular lookout was closer to Hualien and had a massive park near it. 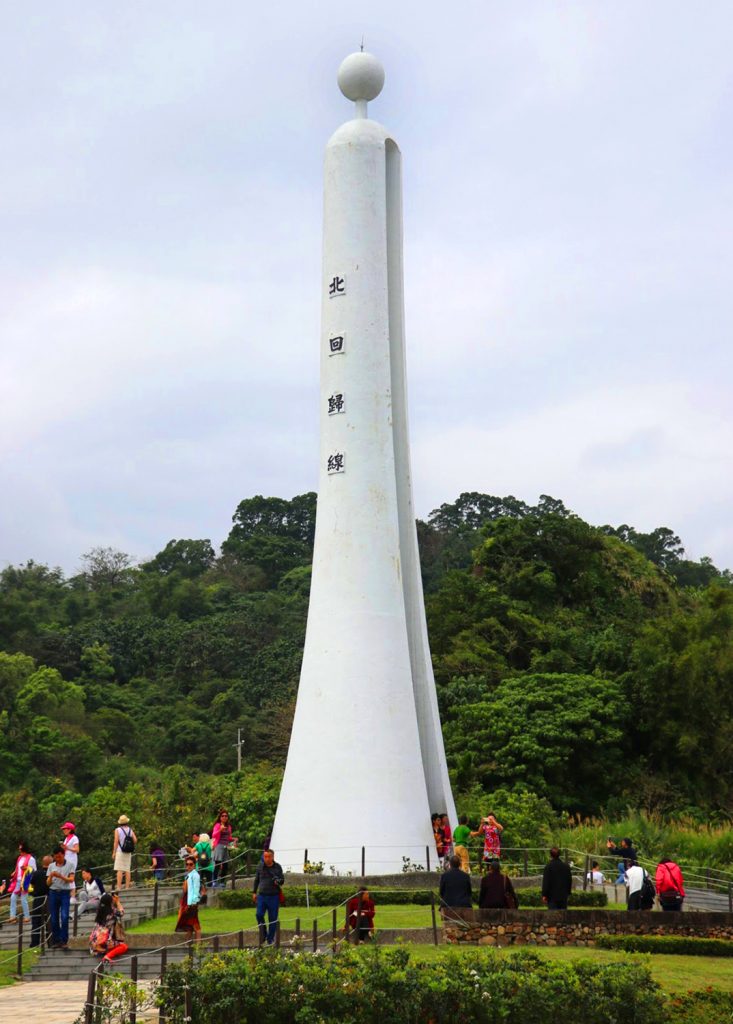 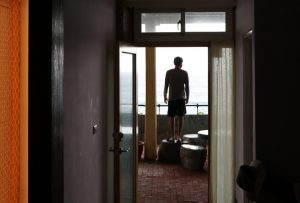 We were the only tenants at this BNB 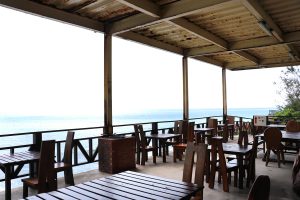 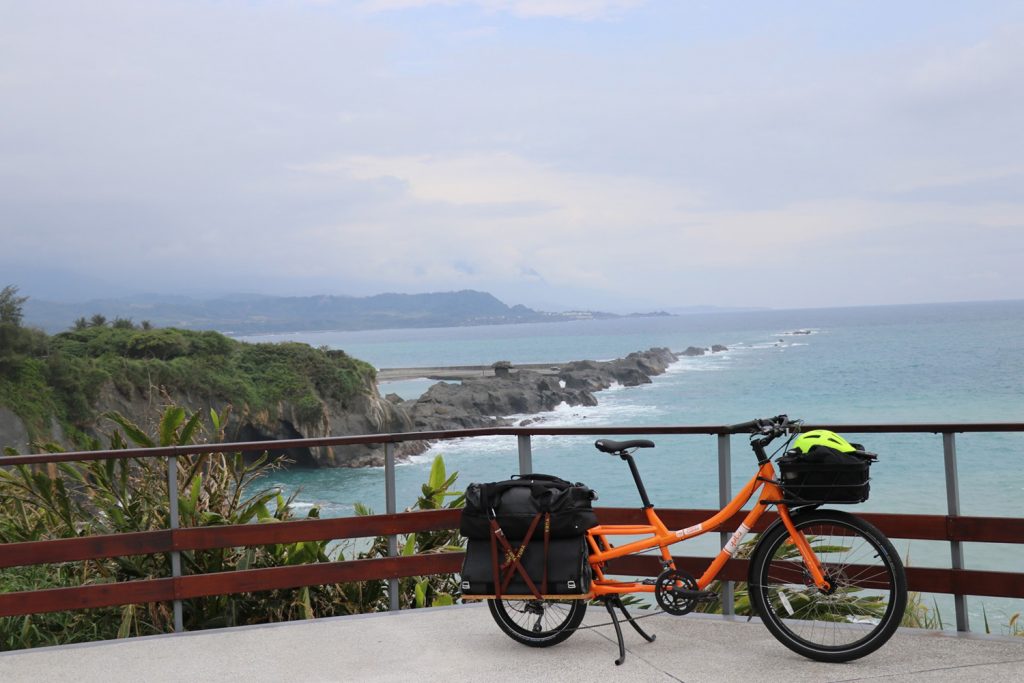 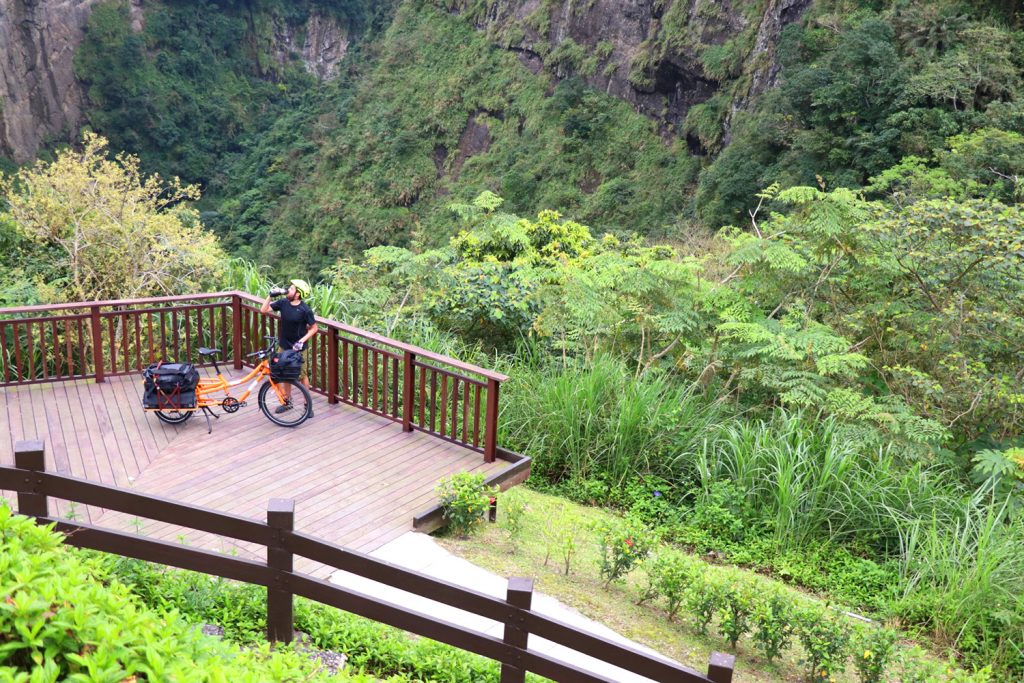 One of many spectacular Lookouts along the ride

I can’t say this enough. The people of Taiwan are awesome! Even though minding your own business is definitely a trait of larger cities, everyone that we interacted with was inviting, friendly and helpful. There were many memorable interactions along the way. In fact, Kevin became the designated photo taker for many of the people we met at some of our lookouts. I captured at least 2 separate instances of Kevin taking pictures for other people. 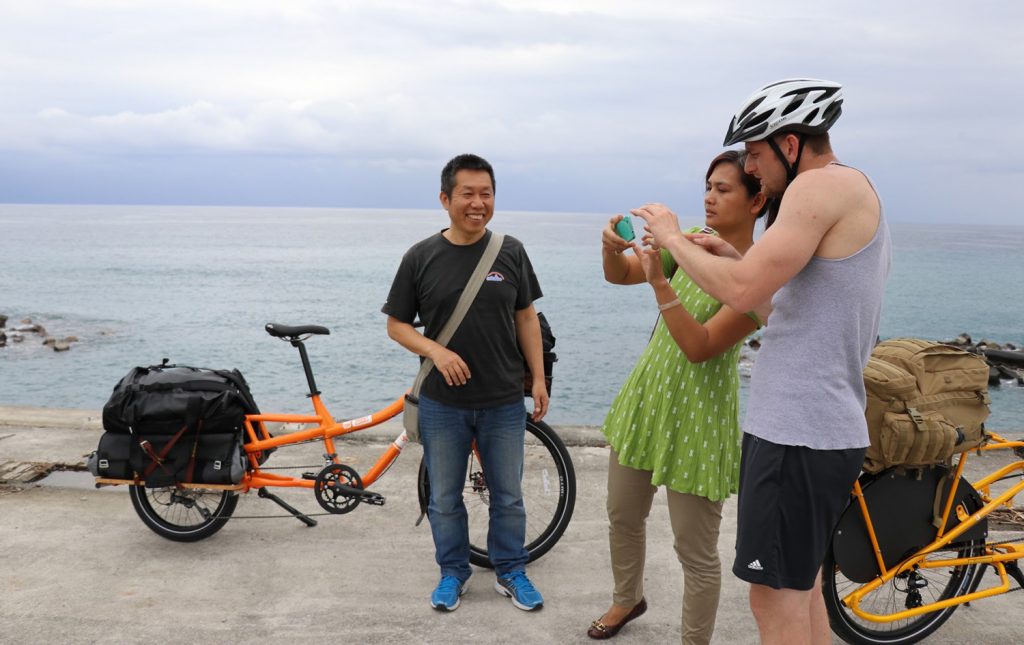 As we assembled our bikes at the train station, one of our pedals was not tightened enough. This resulted in the pedal coming loose during the ride and eventually stripping some of the threads in the crankset. After we noticed this problem, we found a moped shop and asked if we could borrow tools. The mechanic did not speak any english, but I showed him the issue. He went into his tool box then extracted our pedal, chased the threads and reinstalled it. When I pulled out some Taiwanese Dollars asked how much I owed, he gestured nothing and went back to work.

Another instance of Taiwanese hospitality is when Kevin and I rolled up to a remote BNB/jewelry shop after a long day of riding. We didn’t know where to stay and didnt have reservations. The innkeeper/shopkeeper didn’t speak any english and gestured that they were closing. We were able to communicate that we needed a place to stay. After we locked down rooms we asked if he had food, (we were really hungry). Without hesitation he reeled us into his car, drove us to the town center 711 and then drove us back. It’s probably not what you’d picture when you think of “Taiwanese food”, but convenience store food is actually a big part of the city dwellers diet. It’s inexpensive, tasty and on almost every corner. 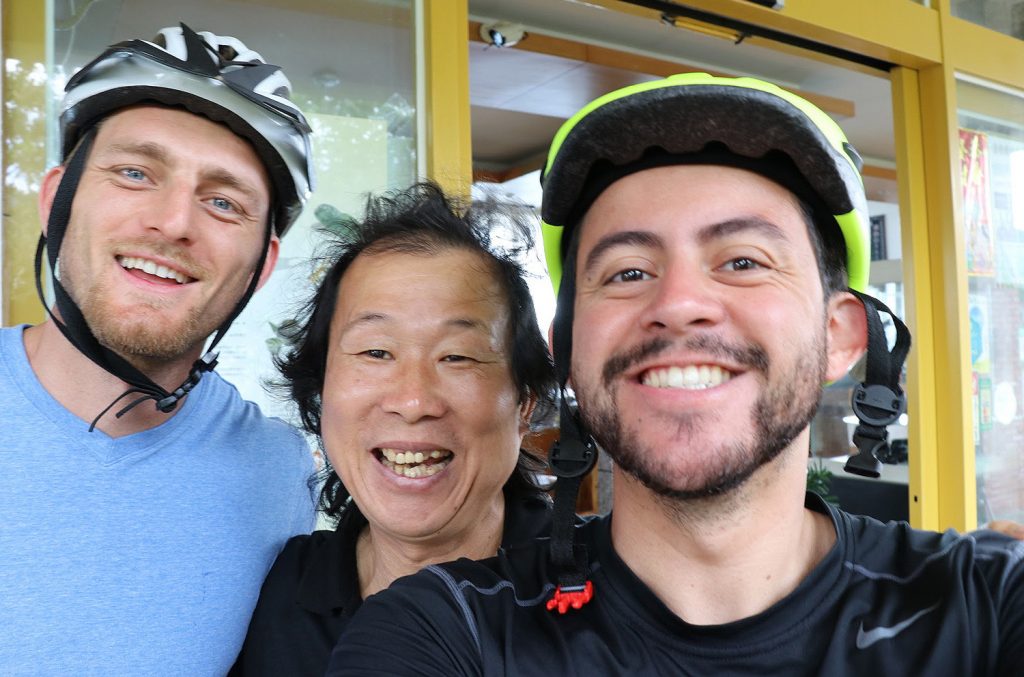 This was an awesome maiden voyage for the first Sweet Curry off the production line. It reinforced how versatile of cargo bikes can be. Many of our riders can rest assured this Yuba model not only makes a great around town hauler, but it also does great on tours where you want to take in your surroundings.

Stay tuned for more from the CARGO BIKE ADVENTURE SERIES by Yuba Bicycles!