Last week, after touring Europe for six months with no truck or van support, the members of the Pleasant Revolution returned to New York City by boat from England, a bit scruffier and stronger than when they embarked in May, and with plenty of great stories to tell.  Four of the group rode V3 Yuba Mundo Cargo bikes.

Above: Amanda Mora Jones performs her original music at Barceloneta Beach with backup from Cello Joe on cello, Louis on Flute, Scat on Trumpet, and Jared May on bass. Four members of the audience pedal to create the power for the stage monitor and amplifiers; two of the four generators were Yuba Mundos.  Click the photo for a large version. Photo: Gerard

Yuba stepped up to sponsor the tour because we wanted to make a genuine contribution to a Bike Culture project we believed in, not just get our name out there. Fortunately we couldn’t have asked for a better crew and venue to put our gear to the test. The Mundos we sponsored were heavy duty haulers, Pedal Power generators, and even a mobile LiveOnBike stage.

Above, yours truly, Fossil Fool, singing LiveOnBike at the Barcelona Bicycle Music Festival, with Jared May on bass and Cello Joe on bucket drums. I joined the tour for 5 weeks when it entered Spain and helped to produce the Barcelona BMF.  Photo: Gerard

Rather than just hauling the gear to our next Bicycle Music Festival venues, we would rock out en route with  LiveOnBike performances, like the one in the video below:

Fossil Fool performs on a Mundo at the Bicycle Music Festival

The Pleasant Revolution would typically stay in a major city like Barcelona for up to a week. Normally we’d arrange to hit cities on the weekends, and camp in the countryside during the week on our way to the next city. 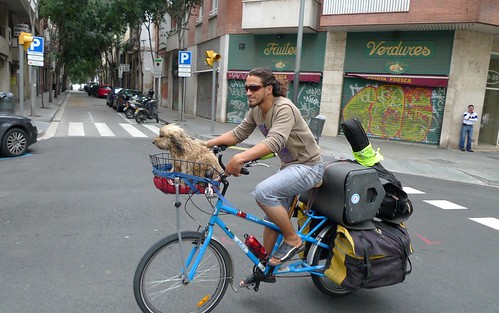 Above: Louis and Pebbles cruising out of Barcelona. Louis also hauled: one of the main speakers, his guitar, flute, and his personal gear including a tent. 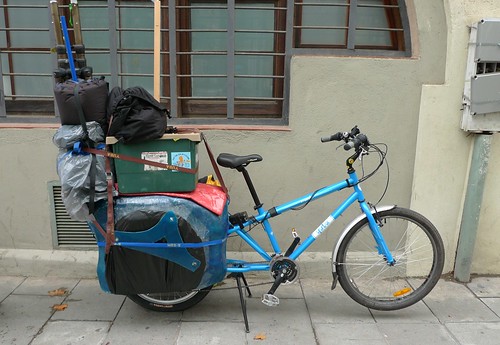 My touring load: The Blue Whale fiberglass speaker enclosure, the food box, and personal/performing gear. After I started getting mysterious flat tires, I passed the food box to Jared. The cause of the mysterious flat tires is now known; rolling on a heavily-loaded flat-tire even a few feet after the flat occurs can cause damage to the tire’s bead. The bead is the part that ‘seats’ in the rim. It’s a bundle of wires sealed in the tire’s rubber material. Rolling on a flat, especially with a heavy load, can expose the wire bead, which then chafes the innertube, causing the next flat.

Above: a video compilation of riding moments, including amazing No-Hands-No-Feet Mundo cruising by Jared May, bassist for the Ginger Ninjas. 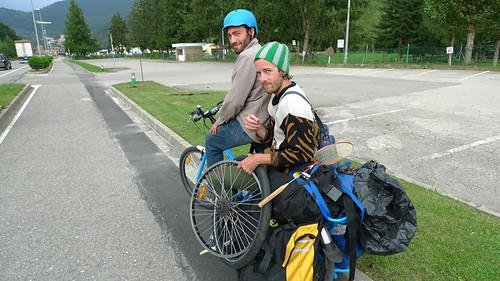 As you would expect the Mundos were great problem-solving bikes. Above, I’m giving Brock a ride to town to fetch replacement spokes for his rear wheel. How do you break four spokes on a 48-spoke tandem strength Mundo rear wheel, you ask? Hit a pothole at full speed at the bottom of a descent in the Pyrenees, carrying a full drum set and your personal gear. 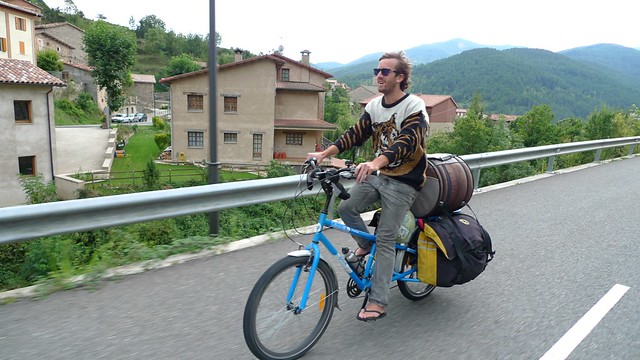 Brock descending the Pyrenees in flip flops. The cyllindrical load behind him is the special nesting drumset he plays as the drummer for the Ginger Ninjas. 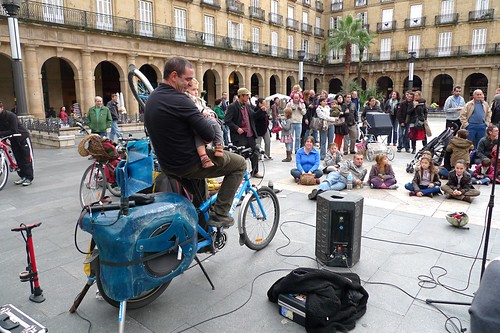 Above: A father pedals the Blue Whale, my touring Pedal Power rig, with his boy at a plaza in Bilbao. The Blue Whale is a Mundo-specific fiberglass speaker enclosure based on a Rock The Bike modified JBL Loudspeaker. What turns the Mundo into a generator are two things: a rear-wheel electric hub (also used as a motor for transportation) and an extremely stiff five-point stand using Yuba’s StandAlone and Rock The Bike’s Lunar Lander, providing an extremely stable mount for the bike. The Mundo’s frame is already so stiff that it performs great as a stationary Pedal Power rig. 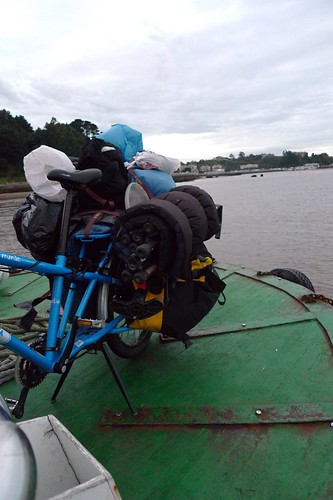 Above, Yuba’s new kickstand, the StandAlone, was a source of considerable envy on the tour.

One of the reasons we got involved with a tour like the Pleasant Revolution is to get user feedback. The rigors of day-in, day-out touring accelerate the wear and tear on a bike, allowing you to see what needs improvement. The daily use also makes for very reliable usability feedback.

The most common complaint from the Yuba riders was the durability of the attachment points on the GoGetter bag. The diagonal forces of heavy loads on bumpy roads caused stitching to work loose on the vertically sewn webbing that buckles the bag to the Mundo chassis. A redesign is in progress, and we’ll be posting a tech tip for how you can reinforce this area at home if wear is starting to appear near your GoGetter’s buckles.

All of the Yuba riders complained about the lack of a suitable kickstand, but that was before the StandAlone kickstand was available from the manufacturer this fall. This emphasized to me how critical a sturdy center stand is for the overall experience of riding a Mundo.

The photo above shows how much faith I placed in the StandAlone: My bike is perched near the bow of a small ferry with no guard rail. Unfortunately we only had one StandAlone between the four Yuba riders on the tour, and it became a source of some envy. I hooked up Louis (a.k.a. Louis the Barbarian) with the StandAlone one morning when he was sick. He thoroughly appreciated it, but unfortunately I had to take it back at our next show to throw the Blue Whale into Pedal Power mode.

See more shots from the tour on my Flickr photoset.

Connect with the Pleasant Revolution directly on their web site.